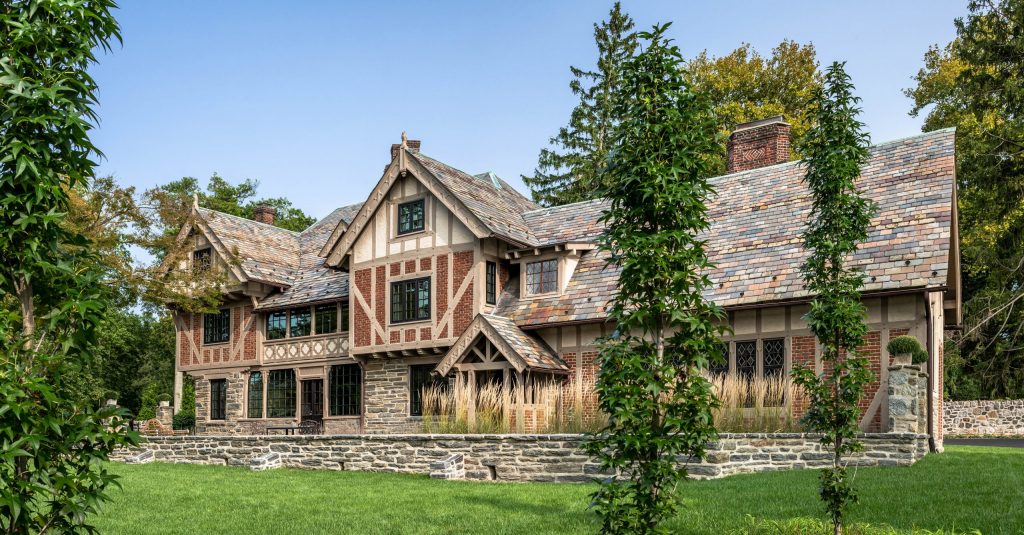 The 1925 Assisi Residence is a stately historic home that combines old-world allure and grandeur with the best of today’s modern amenities and comforts. Located along the Main Line of Philadelphia’s western suburbs, just a stone’s throw from the convenience and culture of Lancaster Avenue, this distinctive Arts & Crafts home pulls its references from both Tudor and Gothic styles. In addition to updating systems and increasing energy efficiency, this large-scale restoration focused on rectifying an earlier substandard renovation. By allowing the home’s sound structure and rich aesthetic narrative to guide the process, many of its period details and inimitable character were protected and restored to their original splendor.

This opulent home was designed and built in 1925 by Frank Stephens, an early proponent of the Arts & Crafts movement and co-founder of the Village of Arden - a utopian Delaware community where artists, intellectuals, free-thinkers, and reformers of every kind escaped the social ills and unchecked capitalism of the Industrial Age. The home features many of the markers of the movement, among them a raised wooden platform in the “church room” - that was once used to put on Shakespearean productions for its music- and drama-loving members.

Above the platform is one of the showpieces of the home, an arched stained-glass window depicting Saint Francis, Italy’s patron saint of animals, whose birthplace - the Italian hill town of Assisi - gives the home its name. The loft over the chapel room is original to the home and was converted into a family workspace and craft room. Here, an iron railing atop the existing half wall brings the space up to code without blocking the exquisite views below. Throughout the space, and the entirety of the home, architectural and decorative flourishes that honor both its Arts & Crafts roots and classic Tudor-style millwork can be found, from the new clover detailing wrought in iron in the loft’s handrail, to the restored gothic arches and buttresses that support and frame church room’s cathedral ceilings.

Critical to this restoration was the custodianship of the home’s innate historic charm; anything new was to have the same level of detail and quality of craftsmanship as its vintage counterpart. In the new period-inspired Tudor-style kitchen and butler’s pantry, leaded glass windows and limestone Gothic arches replicate what would have been found when the home was first built. Imperative to the design’s success was the seamless blending between existing and new custom built-ins, paneling, casework, and decorative millwork. Restored hand-hewn wood beams, hand-carved limestone fireplace surrounds, and wrought iron hardware and fixtures, combined with new stone interior walls, cast stone Gothic arches, and iron gas lanterns are just some of the countless touches - both large and small, added and preserved - that lend the residence an air of authenticity and a marked sense of time and place.

In the master suite, several architectural features were used to create cohesion with the rest of the house. Rich, dusky wood beams - found in nearly every room - bring prominence and weight to the pitched ceilings, and impart an air of weathered warmth. Wall paneling, which is an archetypal device of both Arts & Crafts and Tudor styles, harkens back to the home’s affluent and trade-centric roots. The master bath spares no modern comfort, but features subtle nods to the home’s history, such as the distinct gothic arch above the double vanity, which mirrors the Gothic arches framing many of the home’s cased openings.

With a close eye to detail, craftsmanship, and historical reference, this period home retains its place as an architectural landmark while embracing the technology and conveniences of modern-day living that will ensure its permanence for future generations. 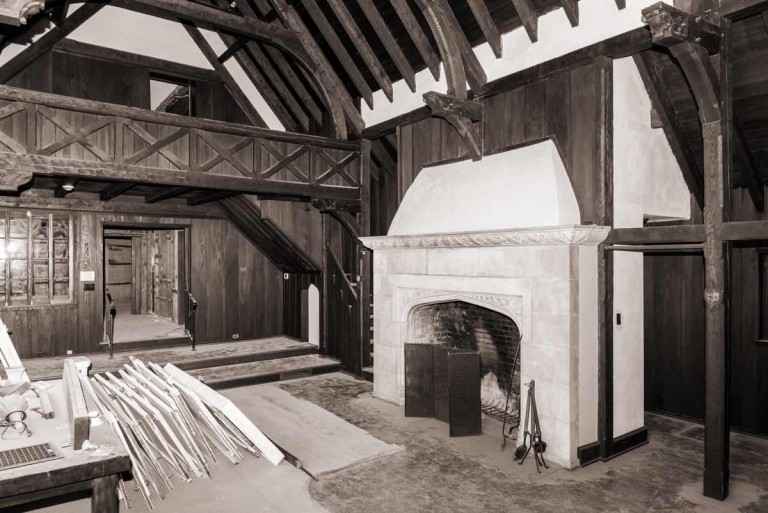 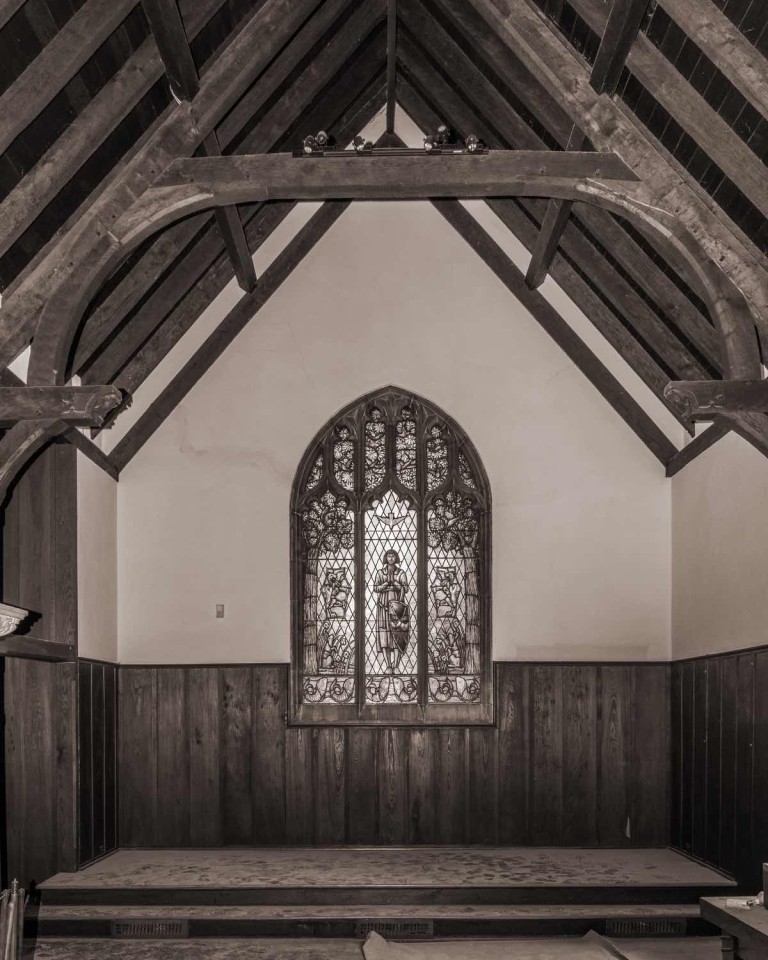 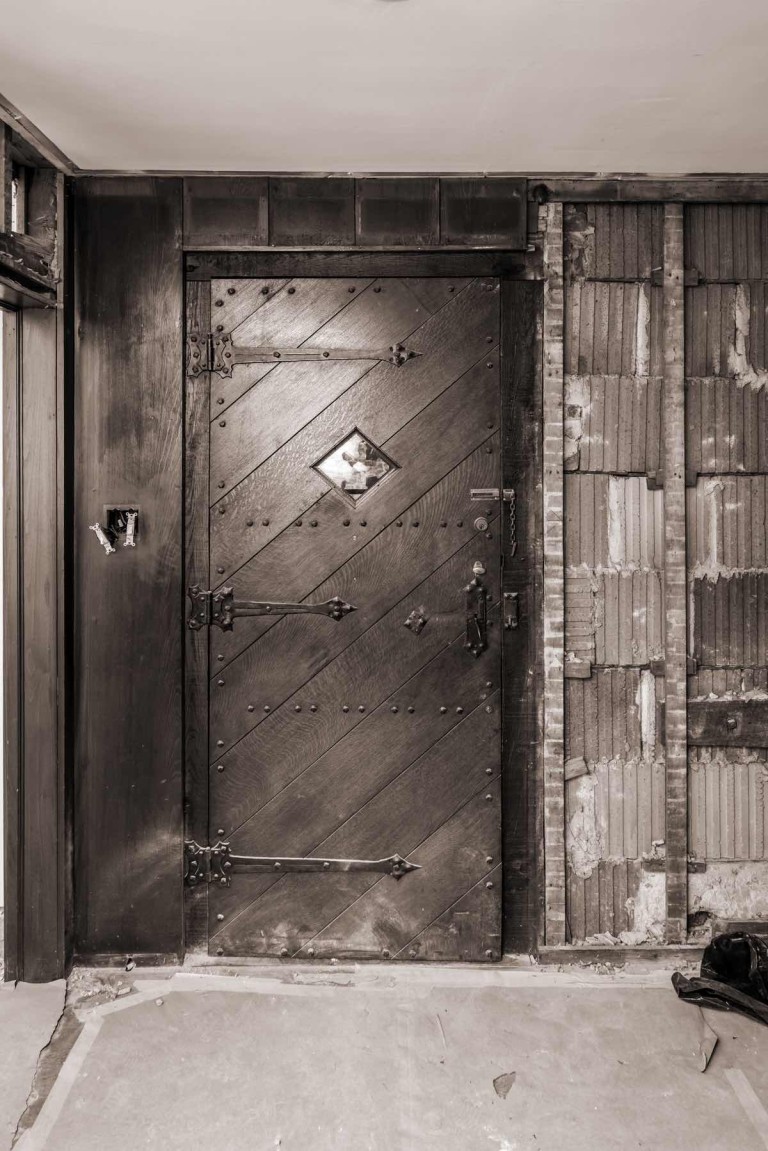 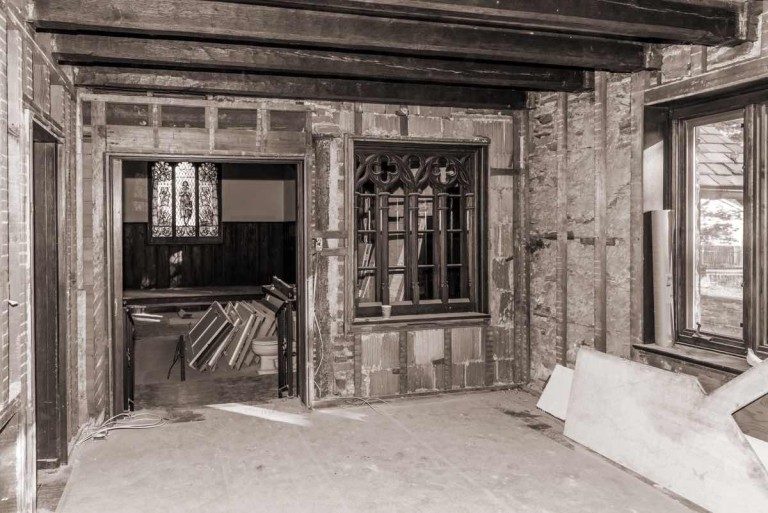 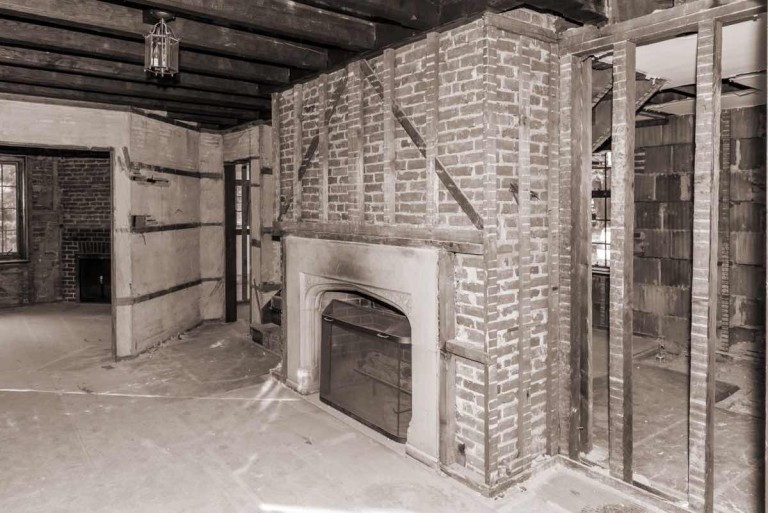 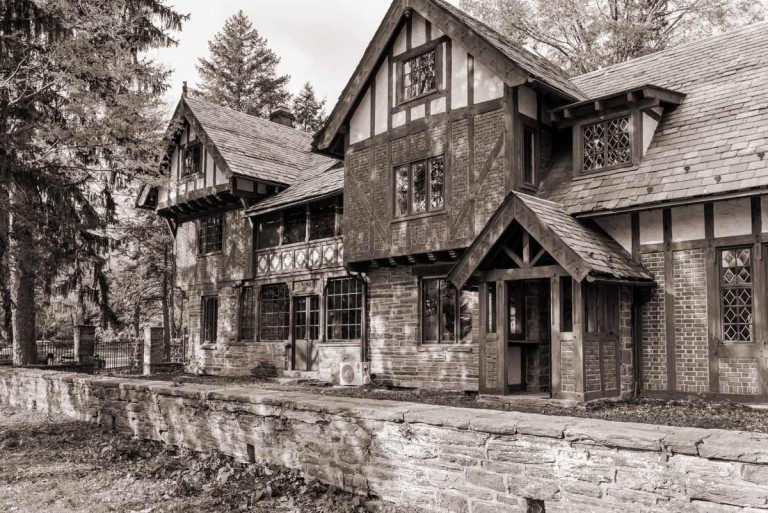 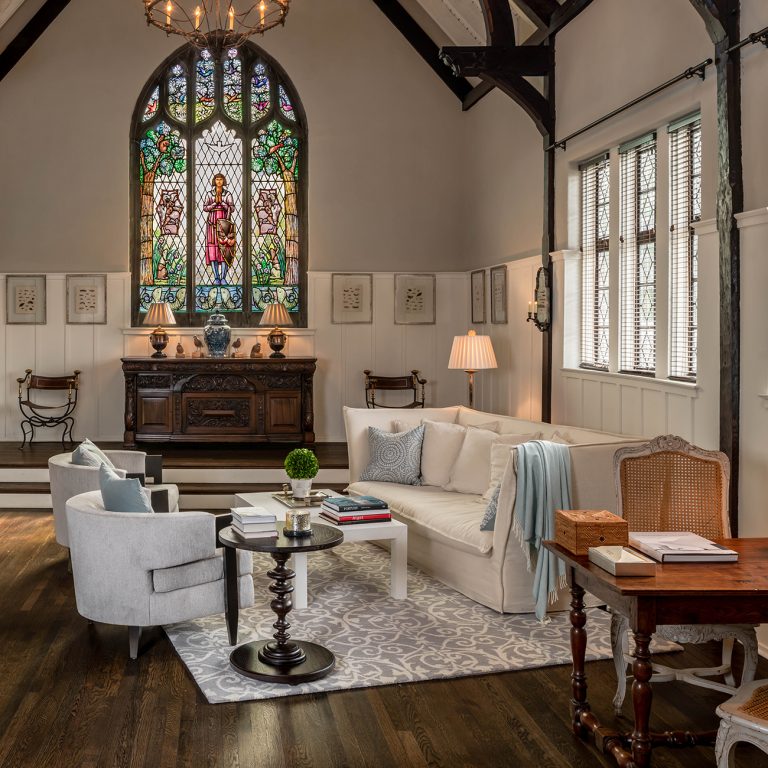 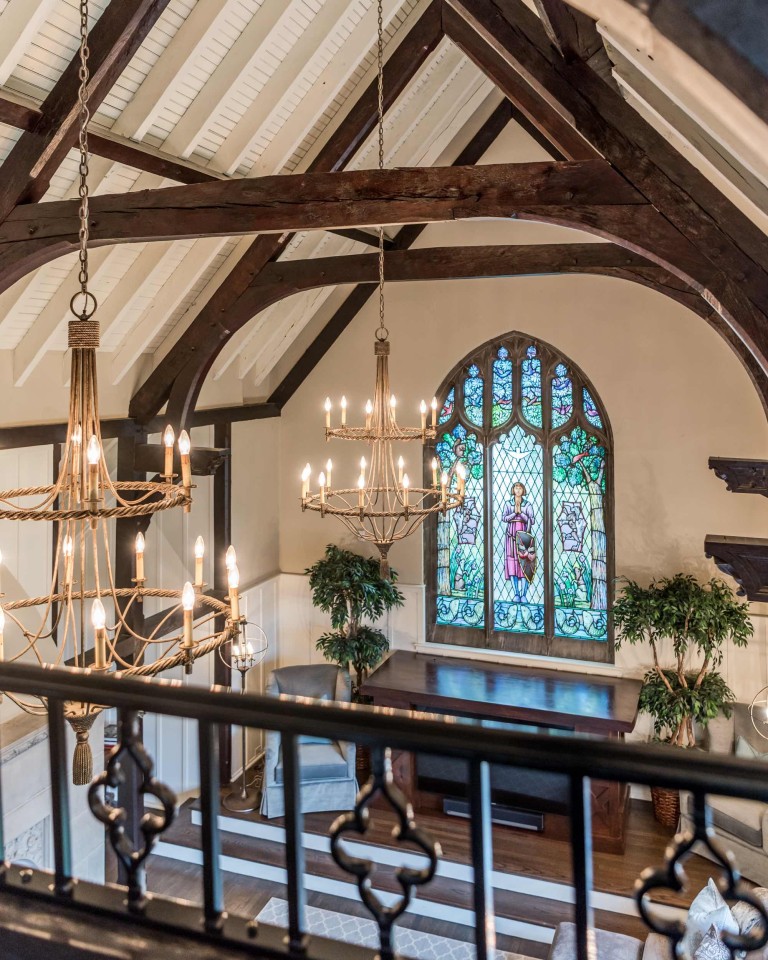 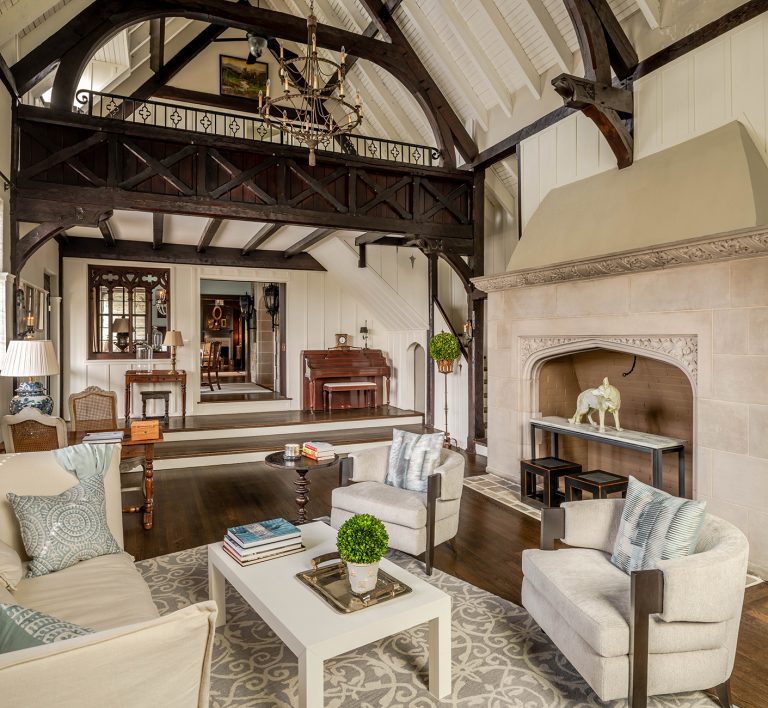 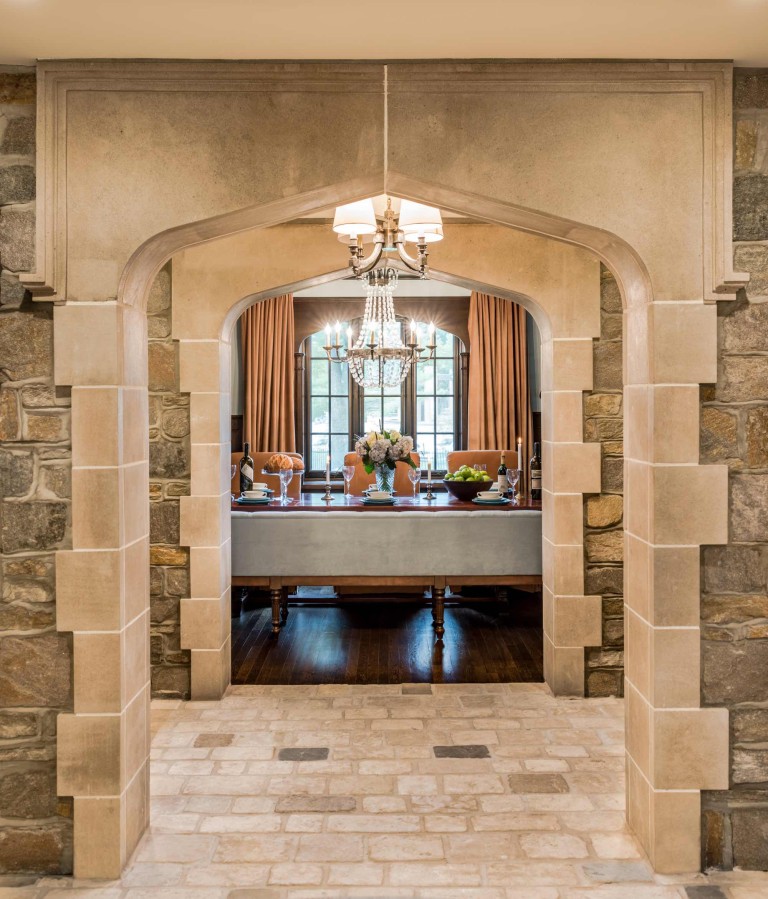 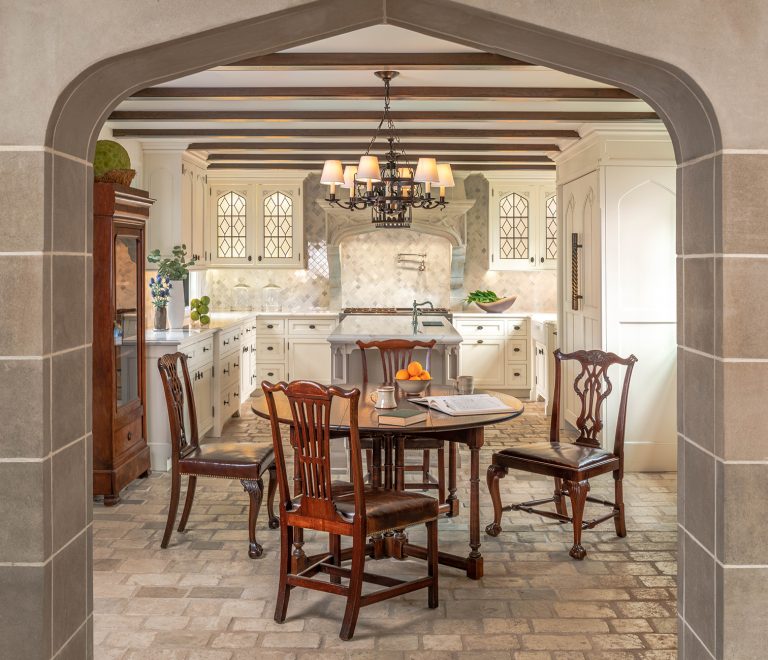 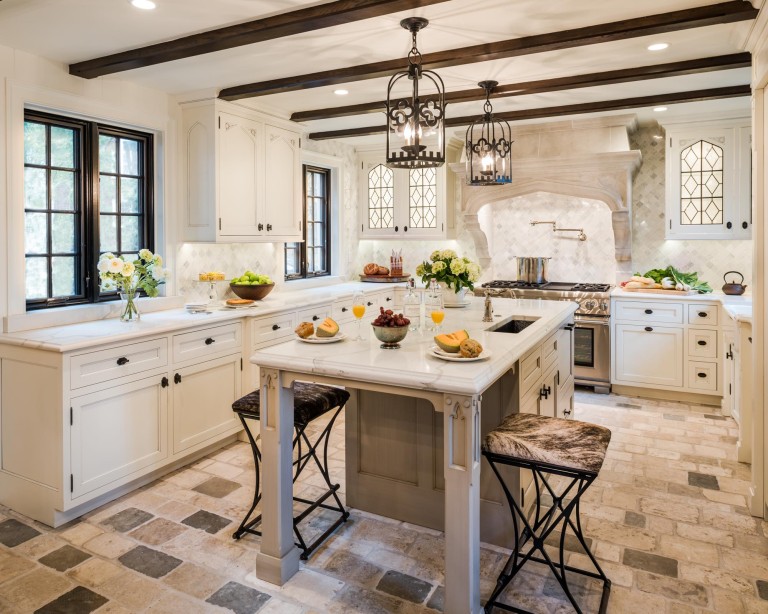 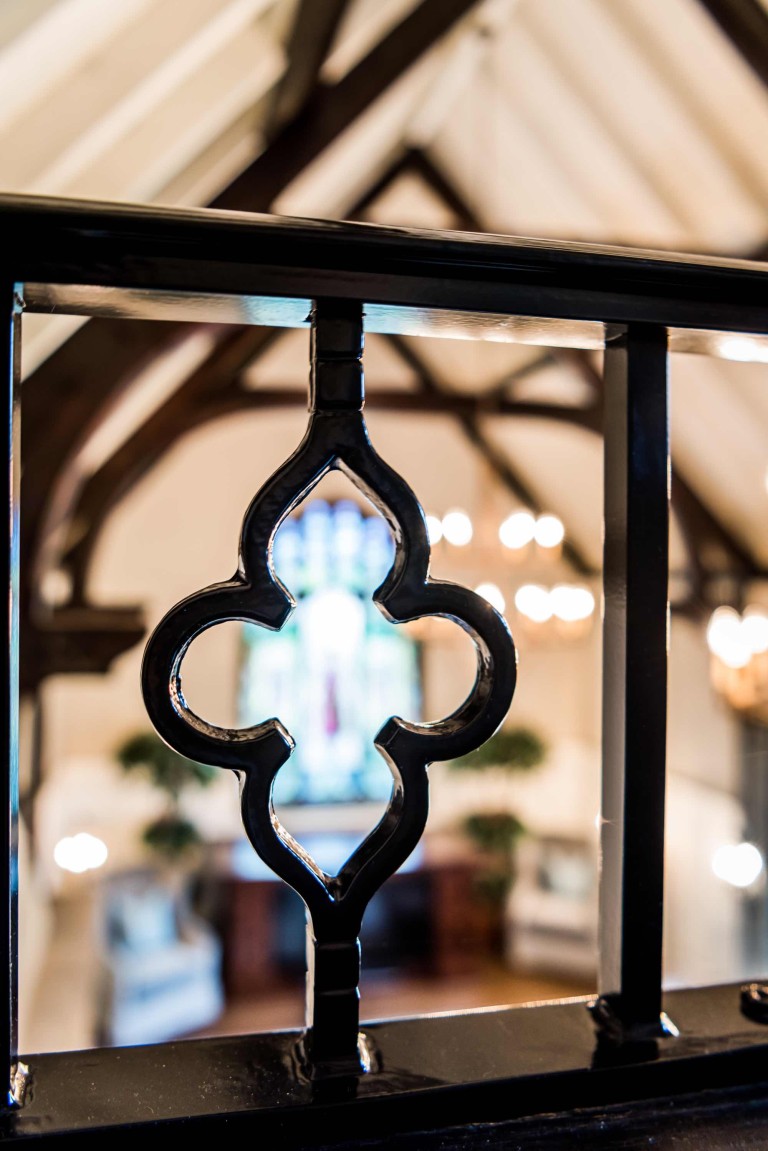 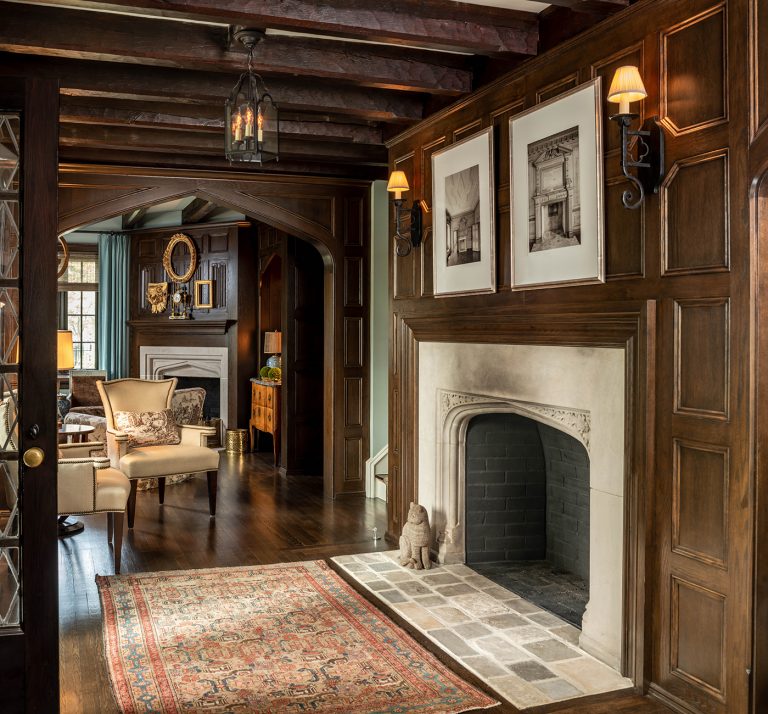 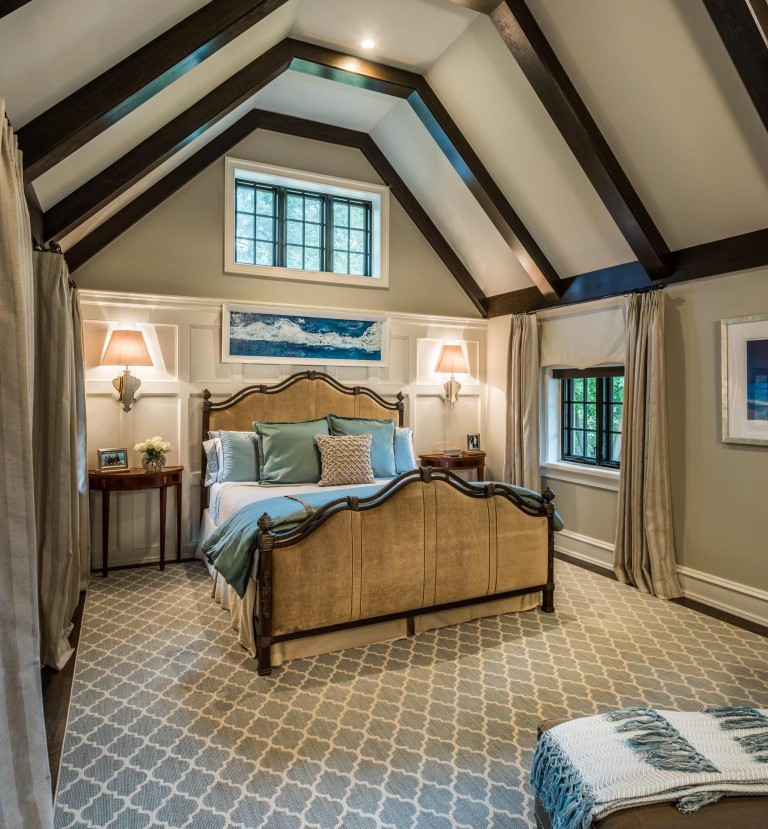 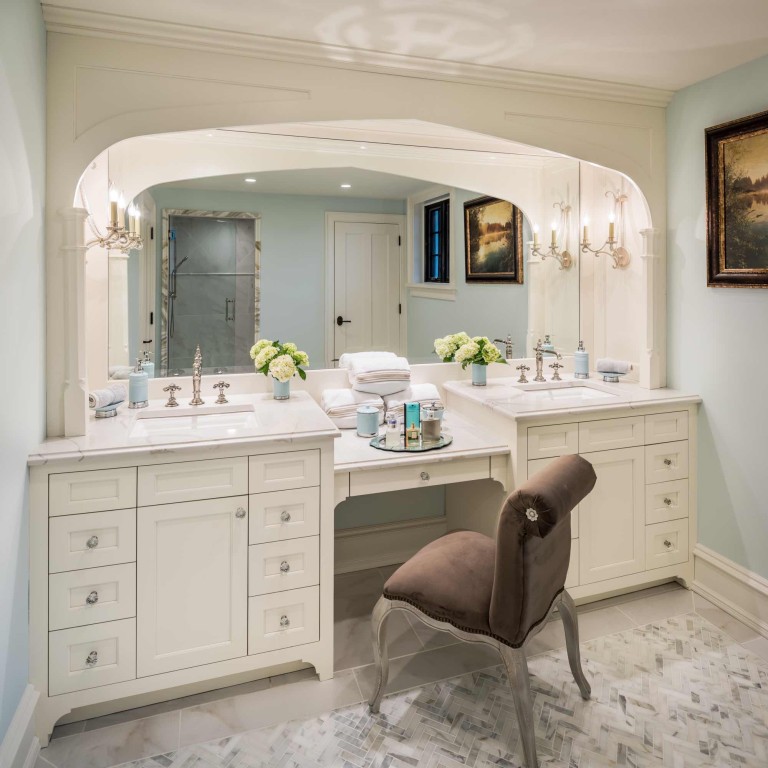 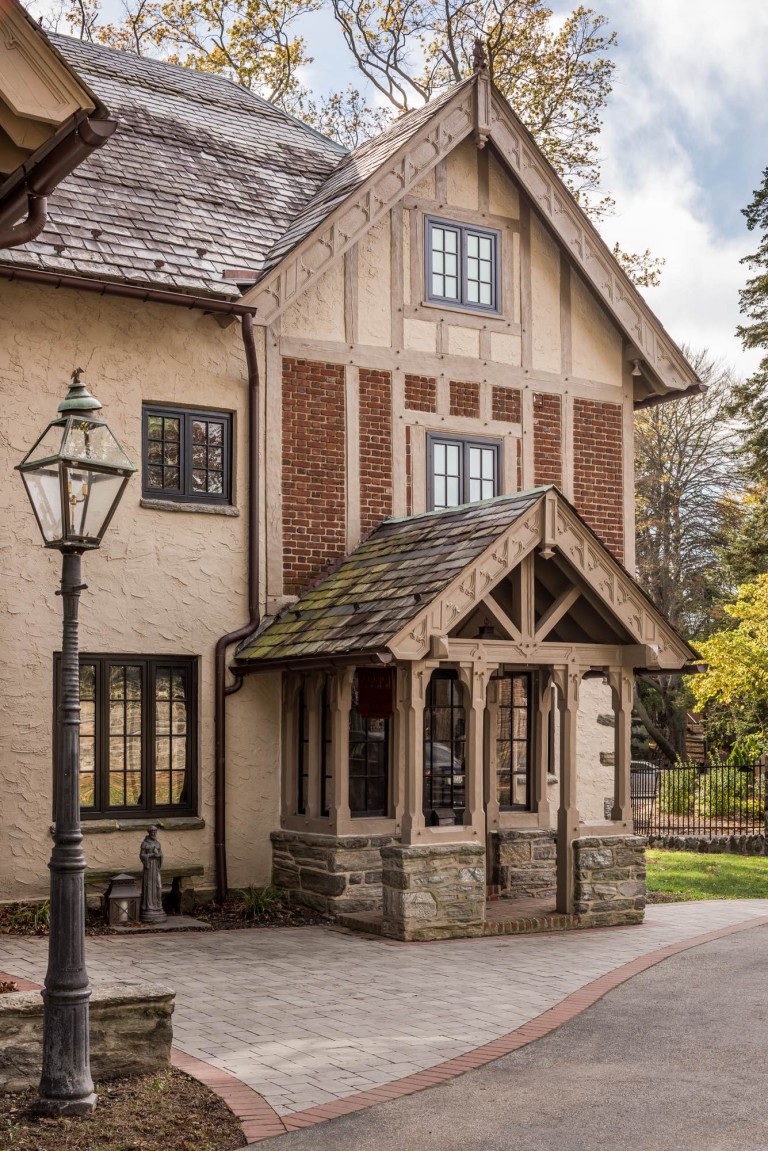 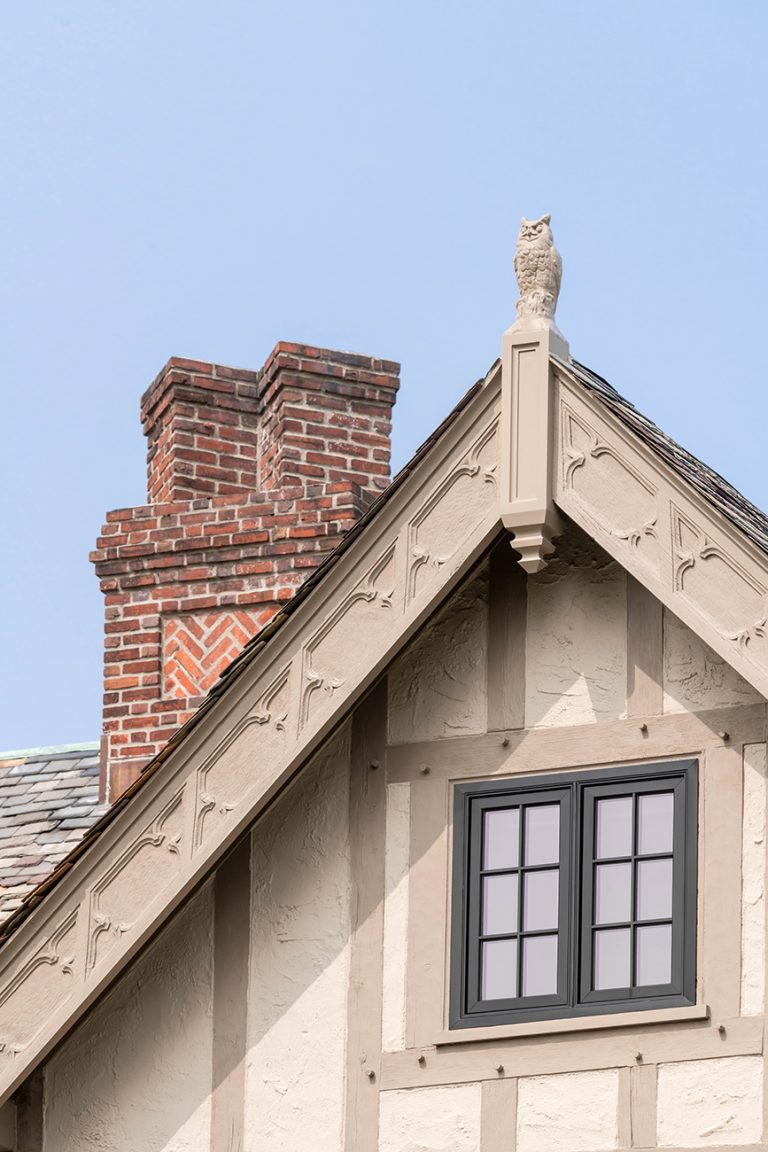 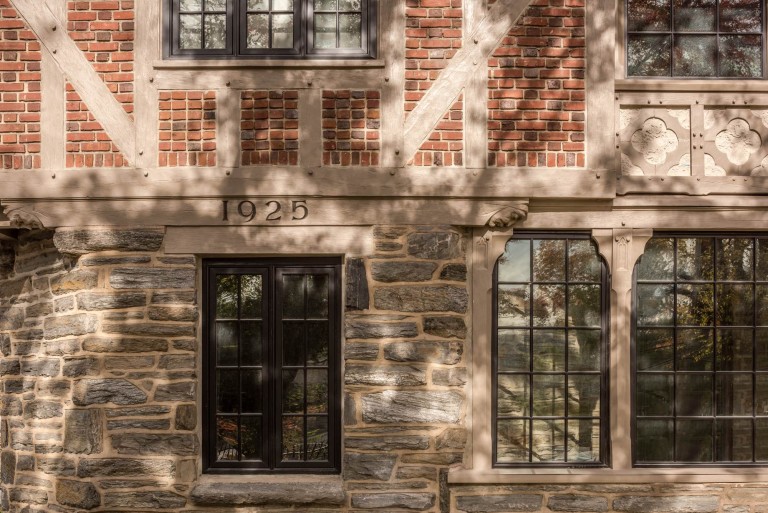 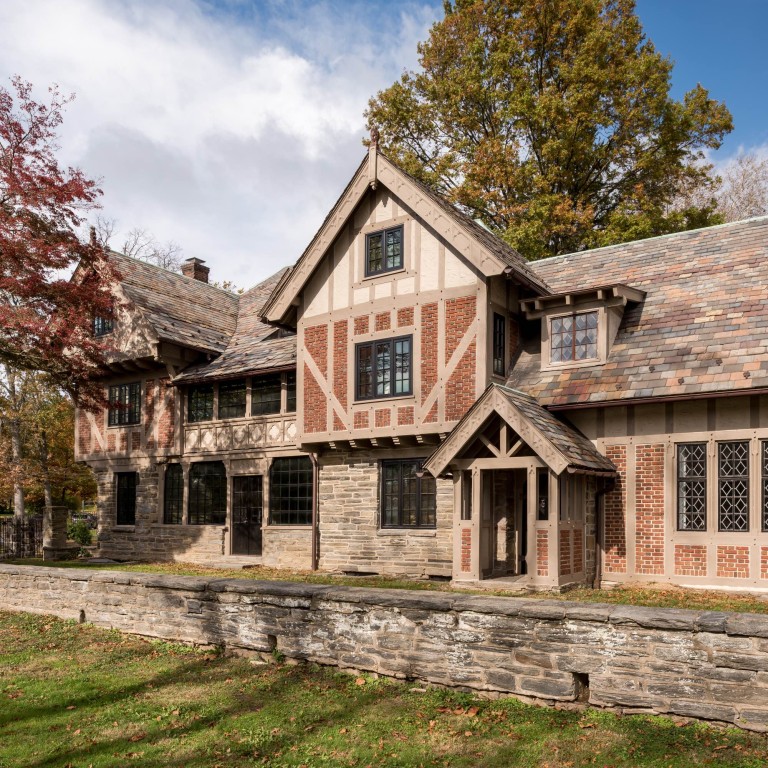 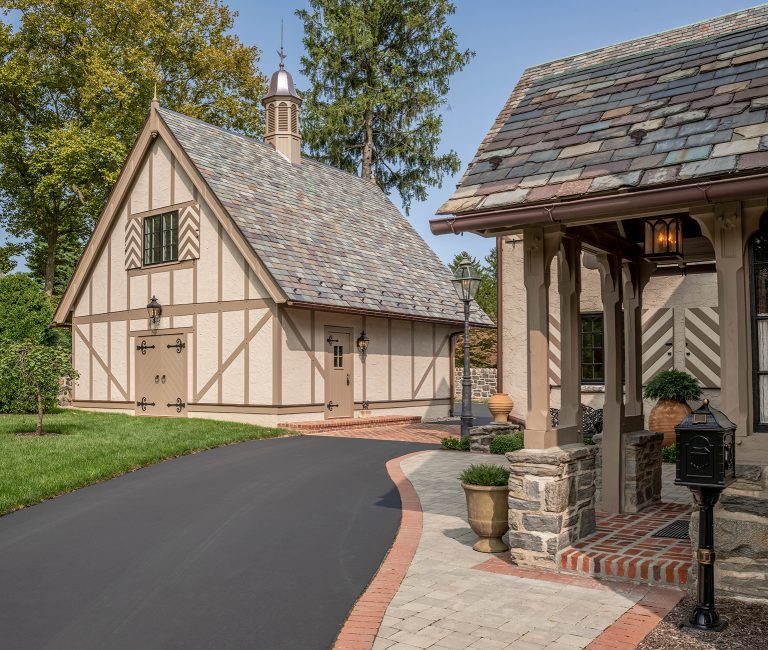 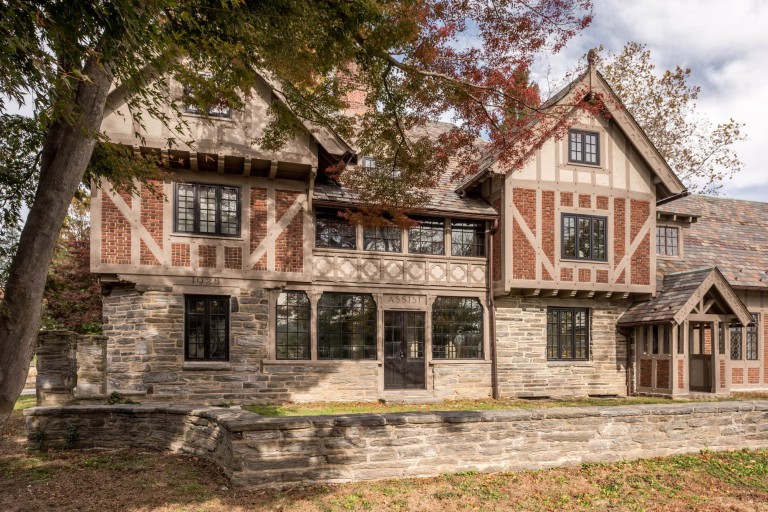